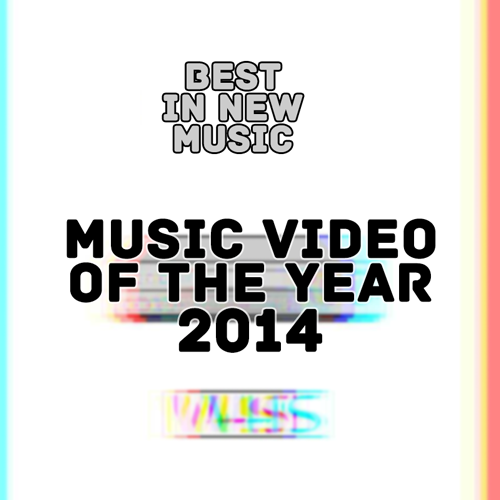 Thank you to all the artists and directors that came up with creative and entertaining videos in 2014. Some of the videos listed show that a big budget isn’t necessary, as long as you have a good concept and good execution. Scroll down, press play and enjoy.

You can view the rest of Best In New Music’s 2014 summary posts by clicking here.

We Are Shining – Killing ft Eliza Doolittle by Ed Morris
Ed Morris’ video for We Are Shining’s “Killing” is absolutely crazy, if you only watch one music video today then make sure that it’s this one! Without spoiling it for those of you that haven’t watched it, I have to say hats off to Shanelle ‘Tali’ Fergus and John Taylor.

ADAM – “Got To Go”
Without spoiling it for those of you that have not seen it yet, all I’ll say is this is not safe for work!

Aquilo – “I Gave It All” Directed by Eoin Glaister
Aquilo’s “I Gave It All” is the first of a two part story telling the story of a love triangle, the visuals are perfect for the music and I urge you to watch the second video “Losing You”.

Beyoncé – “7/11”
The simplicity of this video is what struck me the most, it’s probably Beyonce’s cheapest ever video but it’s up there with her best. “7/11” is a great, fun video.

Chet Faker – “Gold Directed” Directed by Hiro Murai
The amazing choreography, rollerblading skills and the simplicity of the video are what make this video so good.

Disclosure – “Grab Her” Directed by Emile Sornin
Imagine Ricky Gervais’ Office on drugs and you’ll get pretty close to Disclosure’s “Grab Her”, the lead is a douche just like David Brent and there’s alot of funny scenes like The Office. Well worth a watch.


Dizzee Rascal – “Pagans” by Émile Sornin
Possibly the best Grime video ever made?

DJ Snake feat. Lil Jon – “Turn Down for What” Directed by Daniels
This video is absolutely bonkers, just like the song.

Katy Perry – “Birthday” Directed by Marc Klasfeld and Danny Lockwood
The intro to this video is hilarious, let alone the rest of the events in the video.

Garden City Movement – “Move On” Directed by Michael Moshonov & Lael Utnik
“Move On” takes a risque look at love through the video’s two main characters; the colouring, tone and pace of the video work wonderfully with the music.

Sean Leon – Firestorm
One of you voted for Sean’s “Pretty Girls Put Boys In Cemeteries” and in looking for that I came across this video, which is so much better. The way that the story unravels is beautiful and the darkness compliments the song’s lyrics and tone. Brilliant.

Skepta ft JME – “That’s Not” Me by UZI
There are a number of different versions of this video, but this one is the best. The video like the song are a throwback to Grime’s heyday in the early 00s when people like Dizzee Rascal were newcomers.

Yung Jake – “Look” Directed by Yung Jake
This is a brilliantly thought out and executed video, even though it was apparently shot on an iPhone!

You can view the rest of Best In New Music’s 2014 summary posts by clicking here.