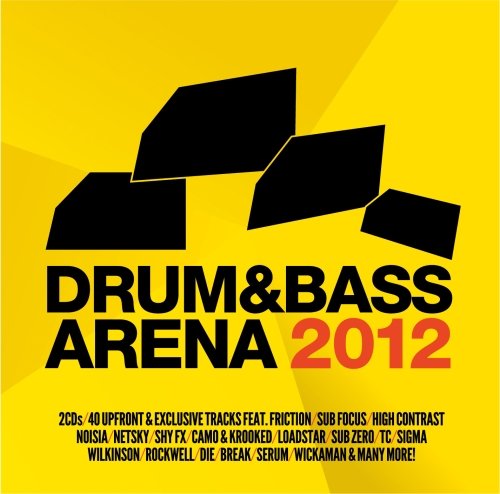 Drum&BassArena 2012 is packed with such an array of flavours, sounds and styles, Drum & Bass is as resolutely indefinable as it has ever been. From big dark bangers to sweet soulful rollers, chart-busting number ones to speaker-troubling underground anthems, Drum & Bass has never been healthier.

With so much exciting variety and sonic stimuli firing from all corners, painting the full scope of the scene with a solid collection of 40 tracks was one of the hardest tasks Drum&BassArena have ever committed to. As the biggest selling Drum & Bass compilation series of all time the bar has been set high, but with the latest landmark release they have managed to raise  the standard yet again.

Drum&BassArena 2012  is crammed with two CDs full of the world’s most commendable production talent. From Shy FX to High Contrast, Sabre to Sub Focus, Hamilton to Noisia, Stanza to Friction, founding scene figures to hotly tipped emerging talent, Drum&BassArena 2012 is bulging with material from the scene’s most crucial players, each cut tried, tested, primed and perfected for total club devastation.

No Drum&BassArena release is complete without a slew of exclusives, and the latest instalment is no exception. It features ten tracks that you will not be able to find anywhere else; one of which – Dimension’s “Children” – has already scored a Next Hype accolade from Zane Lowe! Other exclusive signings come from Optiv & BTK, Stray & Halogenix, Wickaman & Sudden Def, Coda, Serial Killaz, Harvest, Serum and Stanza.

Drum&BassArena are inviting you to attend the launch of the new compilation with them at a show at XOYO, London on 13th April. On the lineup is Brookes Brothers, Phace & Misanthrop, Break, Total Science, Interface and MC Lowqui. Head to XOYO.co.uk or the Facebook event page for more info.

You can preview some of the tracks on Drum&BassArena 2012 by clicking Here, Here or Here, courtesy of DrumAndBassArenaBlog.com.