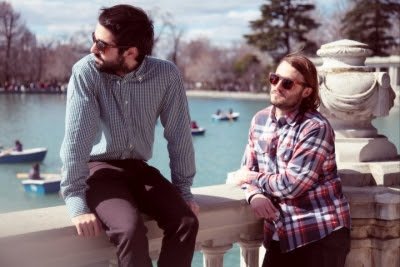 We recently got the chance to catch up with Barcelona based Indie Pop Rockers, Chinese Christmas Cards (CCC). Find out who they are listening to at the moment, who they’re influences are and how they came up with that name in the interview below…

How did you come up with the name CCC?
The story is funny.We chose the name is because we used to call Joan “Xinu” at school which in Catalan means “Chinese”.We liked how Chinese sounded so we knew that the name of the band was going to have that word. It is quite hard to understand or to try to remember how we came up with the rest of the name. We guess it is because it was Christmas time when we started the band so maybe we were influenced by Christmas cards and everything that belongs to that season. Our opinion, we think it’s a shiny and happy name, which at the end reflects the band personality.

How did the band form?
We were class mates for two years when we were 15 years old.  Joan moved to another school after that and we met again a few years later in a surf trip we did with some friends we had in common. At that time Mario was the former member of a punk-rock band and Joan was beginning his career as a music producer and DJ. We had a chat in the car and thought it could be a really good idea to get together once we arrived to Barcelona and put some ideas in common. At the end, it was trying to mix the acoustic ideas and the song writing of Mario with the electronic sound of Joan.  We tried a few ideas, created a MySpace and began to upload songs that we produced in Joan’s room.

How would you describe your sound?
We would describe CCC’s sound as a mix of folk song writing, Pop and Electronic music. If we had to compare our sound with an animal we would say it is like a pelican. Don’t ask why…J

Which band or artists inspire you?
Well, we have quite different music backgrounds. Joan is more into electronic stuff, Hip Hop, American Pop and 60’s 70’s rock like CCR or The Beatles. Mario is more into Folk and Indie stuff. Their 4 inspiring artists: Daft Punk, Postal service, The Beatles and Electric President.

What do you offer the world of music?
Don’t think too much. We offer optimism through catchy songs and dancing beats. At least with this first EP, Lets’ see the next ones!

Who are you listening to at the moment?
Mario: Lucy Rose.
Joan: Justice.

What do you think about the current state of music?
Well, from the point of view of a small band, we would say it is a really good moment to try to stand out from the crowd by doing cool different and intelligent things through the internet. Barriers have disappeared and information travels around so easily that everyone with talent can at least catch your attention for a while. However, money making has become harder for the bands and touring and playing live has become the main way for band’s to get any cash. From the point of view of the industry everything is looking harder and tougher in terms of business sustainability of record labels and the rest of players but, someone will come with the big idea and will turn everything around.

Are you working on your album? If so how is it going so far?
We have just launched our first EP with Mushroom Pillow and now we are working on our LP. We are at the very first stage, just composing and recording ideas at the studio we have near Barcelona. We have to play live and do a lot of gigs all around Spain and we hope other countries, but at the same time we want to keep the hard work and continue doing songs for the next album. We are more “studio musicians” than “live performers” so where we really enjoy our time is at the studio recording and doing new things.

If you were to collaborate with any artist/band dead or alive who would it be and why?
Mario: Ben Gibbard. He is a genius. I love his song writing skills, his voice and his lyrics.
Joan: Thomas Bangalter. Daft Punk. That’s it.

Where was the best city to perform in and why?
For the moment it is Barcelona. It is the place where we have more fans and it is very nice to see them enjoying the songs. However, we want to start travelling and visiting other countries. The experiences we have until now are really positive. Hope one day we will tell you that the best city to perform is Tokyo or Melbourne.

Do you have any plans for a tour? When can we next see you perform in the UK?
Hopefully we will be soon playing in the UK but we can’t confirm any date now. It would be amazing to see you all soon performing in your cities.