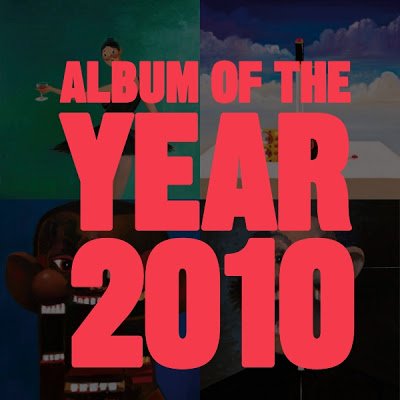 As ever, there was a lot of music released this year and at times listening to it was a chore rather than a joy. You know the experience; you hear a few songs from the album and like them so you decide that you’ll get it when it’s out. Only to find out that the album is full of crap filler. So although you have the song(s) that you wanted you feel out of pocket because you could have bought them on their own for cheaper. I’d like to celebrate the album’s that justified the hype, fulfilled expectations and took proud place in your music collection.

The one album that I can say ticked all those boxes and more was..
Kanye’s, My Beautiful Dark Twisted Fantasy. It was an INSTANT CLASSIC.

Not only did I have big expectations after hearing “Power”, the anticipation and media interest began to increase and after his show stopping performances of “Runaway” Mr. West could only sink or swim. Not content with the interest and anticipation surrounding MBDTF Kanye then blessed us with a ton of free music with his G.O.O.D. Friday series. This gave us bangers such as the “Power Remix” featuring Jigga & Swizz Beatz, the Pete Rock produced “The Joy”, “Christian Dior Denim Flow” and “Good Friday”. Little did we know that some of the songs that he was giving away for free would also appear on MBDTF, G.O.O.D. Friday was the first that we heard “Devil In A New Dress” (probably my beat of the year), “So Appalled” and of course “Monster”.

(Although you may not have noticed at the time) We were introduced to the songs that we hadn’t already heard from MBDTF on Kanye’s “Runaway” film, which didn’t make much sense but was every bit as stunning as Selita Ebanks.

You would think that after having heard a lot of the songs before the album was released that people would feel let down? No! The treat was that the music on MBDTF was so good that we were happy to have the songs in their entirety (not just the short clips that played on “Runaway). Songs such as “Monster” and “Devil In A New Dress” also featured changes with the latter being blessed with Rick Ross’s flow.
Rather than go through the joys of the album, I have tried to let you know the context in which the album was released. While choosing to omit the Taylor Swift incident because that was just blown out of proportion. Because going though the album’s highlights would probably result in an essay and thousands of other people have already done that (plus I don’t have the time for that and I’m sure you don’t either!). So I tried to give you something a little different.

Disagree? Think someone else should have won ‘Album of The Year’? Then get at me in the comments or hit me up on twitter: @iamorganix.