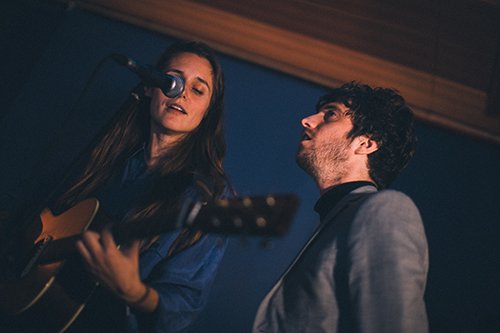 The Coo are an international duo with it’s members being based on opposite sides of the North Sea. Matt Arthur (London) and Jara Holdert (Amsterdam) met in the summer of 2016 by chance at an open mic in Jara’s hometown. In the following two years they wrote songs together over WhatsApp, stayed in touch using FaceTime and visiting each other whenever they could afford it to play acoustic shows together. Their debut EP, Amsterdam Moon, was recorded in an old synagogue in Amsterdam, with the duo performing live infront of friends and fans. “Rosie (Live)” is a taste of what the pair have been working on over the years and it’s proof that good things come to those who wait. The song is out now on Apple Music and Spotify.
.embedtool {position: relative;height: 0;padding-top: 56%;overflow: hidden;max-width: 100%;} .embedtool iframe, .embedtool object, .embedtool embed { position: absolute; top: 0; left: 0; width: 100%; height: 100%; } .embedtool .fluid-vids {position: initial !important}